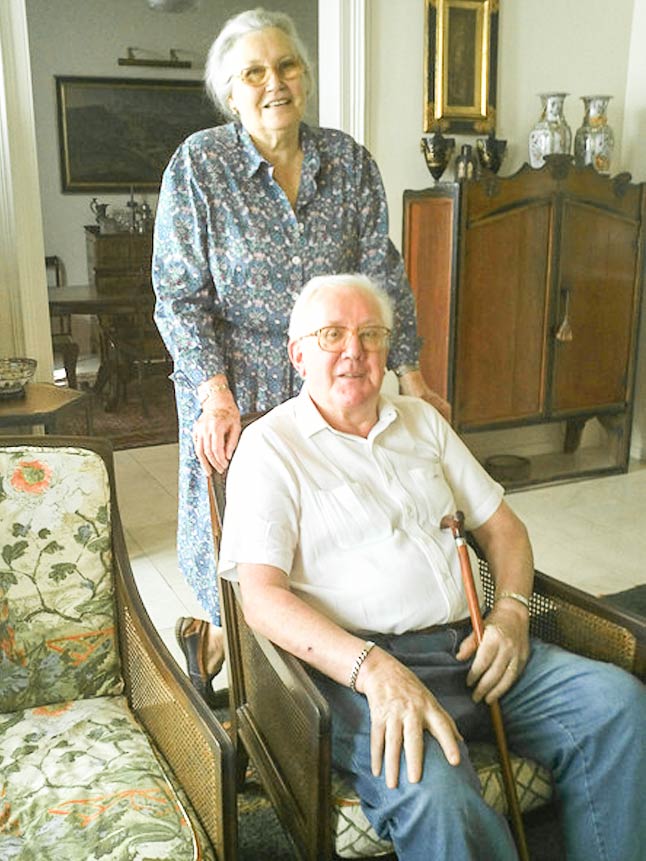 Patricia Niesh is a founding member of the amazing Barcelona Women's Network. The ladies can really teach the rest of us a few things about imagination, organization and getting things done. Every week countless events are created and implemented. I really don't know how they do it.

Patricia and her husband Alex live in an amazing flat that is in the heart of the Ribera district, one of Barcelona's oldest.

MB: Tell us about where you have been?

Alex: We left the UK for good in 1962 as I saw no future given the abuse of power by the trade unions and the failure of the government to attack the real problems. We emigrated to Argentina where Patricia´s family had been living. Her father, born in Australia,was a commodity trader with one of the leading international firms in that area, and her mother had been born as British subject in Japan. They were on the last boat of refugees to leave and were posted to Canada, then Brazil, and then to Argentina.

Patricia and I met at Edinburgh University and were married there.

MB: How long have you lived in Barcelona?

MB: Why are you here?

Alex: When I decided to retire we had no plans for a location as we had assumed our two children would want to return to the Brazil where they had grown up and which they had loved. But both went to University in Britain and decided South America was not for them. This freed us from staying on. We thought Portugal could be our new home because of the basically common language but I underwent a major brain operation under the leading surgeon in the world in Canada and my specialist refused to sanction it as he said Portuguese medicine was backward. When we said Barcelona was another possibility as friends from the diplomatic world had moved there, and our impressions of the city had been excellent, he gave the OK describing the place as one of the leading international health centres.

MB: You have an amazing house, can you describe it?

Alex: The apartment we have was originally the entertaining floor of the house of the Sert textile magnate. The painter Jose´Maria Sert was born there and for that reason it had been classified as a listed building. Over the years, however, it had been allowed to deteriorate as it had passed into the hands of a religious foundation that was only interested in extracting the maximum rent as it was not allowed to sell it. For many years it housed the workshop of a junk jeweller. There was no electricity and cables from an outside patio were stitched to the ceiling. The room where the painter Sert had been born saw people burning an open fire and hanging hams from the roof.

The plaster ceilings, however, were works of art. Two pairs of doors that are amongst the earliest surviving work by Sert had been pushed back against the wall and like other engraved glass doors that had been similarly treated had survived. As the ceilings were so high they too had survived and just needed cleaning and repainting.

Patricia fell in love with it even though at 350 square meters it was much bigger than we had contemplated. I hesitated because my experience elsewhere suggested a 7 year project. We found a wonderful craftsman to deal with the woodwork,electricity,water and so on. He had half a dozen sons who had all graduated in the same field and amazingly the major work was all completed in under a year.

The only real problem was that the Municipality assigned us a technician to supervise the work. His sticking point were the floors of interlocking ceramic tiles we found hideous.He argued that once cleaned by a special acid they would be fine but instead we ended up with a piebald floor of russet and yellow. It was only then that he agreed to extend through the entire apartment the marble that was to be found in part of the building.

MB: How did you find it?

Alex: Patricia spent close to 2 years traveling from Brazil to Barcelona looking at places but did not like the modernista floors with entertainment sectors at each end and bathrooms that had to be accessed though the bedrooms. Our friends from the diplomatic world were also looking for us and located a building dating from the 17th century that had been remodeled two or three times but had features that for us were drawbacks. They bought it themselves and a year or so later came up with the one we fell for despite all the restoration it required.

MB: What are the things you like about living in Barcelona?

Alex: The culture, the wonderful museums, the architecture of Gaudi, the Palau del la Musica, 200 metres away from our home, the restaurants like Casa Calvet, the climate, the cleanliness of the city

MB: What are the things you dislike about living in Barcelona?

Alex: The tendency for certain areas to be swamped by cheap tourism and those ghastly stag nights

MB: What is your favorite place in the world?

MB: What do you love doing?

Alex: Tell me a story about your life.

The main points are covered above. In summary we gave up on the UK and I went on to build a business career with a private family company. In time I became its administrative head, overhauled totally its reporting systems, then accumulated responsibility for its financial management and its holding company structure. This led to my becoming the company´s first non-family director and participating in the restructuring that was to lead to an American stock exchange quotation.

Thanks Patricia and Alex!